Got a ‘Being Human’ shirt??? Probably yes! We do believe in updating ourselves with the latest trend even if we do not genuinely give it a thought. As I see the young and mid old wear colours and roam on the streets of Bangalore, I anchored myself to keep a count (not that I do not have better things to do ;)) 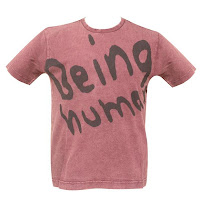 Commercial Street in Bangalore is what SarojiniNagar is to Delhi. A fashionable crowd eager to make an earnest style statement, petty thieves looking for an enduring opportunity to put their hands to work, shopkeepers announcing the fab discounts in store amidst aspiring eyes that wish to own everything they pass by is a regular sight.
We were proud of our timing to find a parking for the Hyundai I2O. It was going to be a family and fun day for the three of us (my aunty, her daughter and the writer). We walked down to the main street as I constantly nodded to the introduction tour of ‘Shopping in Bangalore’. It was noon before we found ourselves seated in a restaurant. The order of a biryani, mushroom, chana bathura and a roti took us an hour to consume and provide us instant energy.
We hit the shopping spree in the later half relentlessly trying to have the best in the market. In an expedition to challenge my love for floaters, we entered a footwear shop that said “Anything 100 Rs”. I thought it was a fair deal to welcome change. Amongst the rush and crush, I managed to try two but still seemed unsatisfied. I put my purse along with the mobile on the stand and began to wander in the shop looking for better options. Disappointed we came out of the shop, when the shopkeeper called out to us waving his hand. It looked familiar! It was my purse that I had forgotten to pick it up from the stand after the resentment. I heaved a sigh of relief. My new Galaxy was just a day old and I went crazy over making an attempt to abandon it.
I thanked my stars and decided to return back as we were running out of time. We relished a kulfi and faluda and walked down to the car discussing how better shopping could be. The blue was visible from a distance and I neared it to find the rear window open. For a moment I was in a shock at my second negligence in the day. My aunty peeped in to assure me that someone had broken into the car and the glass pieces were all around along with the blood stains. We went to the police station, filed a complaint and waited for the FIR. It was pretty quick for a Sunday with only two people in the police station. Before we left, the policeman made it a point to reaffirm that bank documents may not possibly interest the ‘human’.  He also said that there was zero probability of finding the lost bag and the laptop! My eyes screened the room to find the ‘Satyamev Jayate’, for he was indeed being truthful!
India at 61

It was amidst tight security that the Republic Day Celebration concluded in Delhi. The South Korean President, the guest of honour witnessed India's fineese in every aspect (includes the fog and mist!).The news channels went debating rather doubting India's identity of a Republic country as usual. I just wonder why this question comes up only on certain days; Ambedkar Jayanti included as well! Twitter saw tweets right from defining the meaning of republic by eminent people to the celebrations by the aam aadmi ('mango man' as put by Saif in Love Aaj Kal). To be open about this, it was yet another holiday for some and a half day for the rest! I felt proud as I woke up at 8 due to the National Anthem being sung in the near by school.The rest in my hostel were sound asleep... Though the 11 five year plan assures no food security as it did in the ninth five year plan, I found India on the road to self sufficiency and self efficiency. This might be a drop in the ocean but th
Read more