The World of Seliger


Amidst my agony and pain was a world away from the world- Seliger, with a picturesque beauty that I had often seen on the big screen and considered giving Tollywood a try! The serenity of the water, the warmth of the sun, the chirping of the birds, the fragrance of the mud and the never ending greenery on the other side promised me solace. 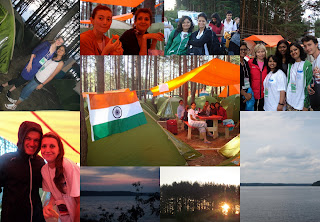 Goodmorning, I am ‘Lee’ana! I am your translator and he is your instructor ‘Sasha’ (then)”, said a tall, cute and strikingly beautiful twenty year old from Samara, Russia. She was clever and a fast learner as she managed to mug up the names of the Indian delegation that seligerially resided at Camp no 329.

Sasha could be characterized by his shyness and his love for saying “ I know NO English”. He kept to himself most of the times (till the last day) but was highly concerned and made sure that we attended all the lectures. Thanks to us that Sasha has discovered his Unique Selling Proposition (USP) that I shall dedicate a post to.
After signing a couple of five applications, the two energetic volunteers Aditya and Riddhi followed Leana to get us breakfast that was as tough to eat as the journey to bring the breakfast. After a competitive sleep in the bus and an unsatisfactory breakfast, there were no traces of tiredness and we left to attend the lecture. Inna, our translator and the lecture guide showed us to the venue where we learnt about Russia’s Strategy in the years to come. It served us a heavy dose of jet lag as we came back to our tents to have a peaceful sleep.

The Indian flag pinned to my tent smiled as we approached. Riddhi and I slid into the tent and rested our back at 180 degrees to get acupunctured by pine cones, dried grass and small stones that lay underneath. The desperation to sleep over ruled a change of mind as we woke after a couple of hours. The lectures followed as we attended all due to a growling Sasha! The dinner dimmed our hopes of food leave alone the word ‘tasty’ as we made merry on the first day at Seliger.
Seliger 2011 Seliger Diary
Location: College Station, TX, USA