- July 06, 2009
It has been a long time since I have visited my own blog. Now you might be wondering as to what kept me away for long?(even if you are not!) The Gentlemen have really become so gentle that they have left me with no chance to criticize their habitual action of getting into the Ladies Compartment!But this time something of such a kind happened that brought me back to pen down my thoughts.
I was returning by the 5:00 PM local from Hi-Tech city.The ladies compartment was a bit crowded but then I managed to find a place.A grandpa and grandson were sitting before me. This little guy reminded me of Ishant Awasthi from TZP. I was gazing at him only wondering that if Amir Khan would have seen him, he would have the preference. I just wanted to talk to him (felt like)! 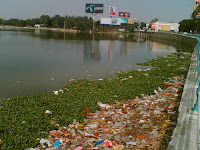 I initiated the conversation asking his name.He replied Akash.Then I asked him about his school. He told me the name but that din't sound familiar to me.So I kept quiet. Then his grandpa told me that he lived in Delhi and had come for the summer vacation.Well the next question was inevitable! I asked him if he like Hyderabad or Delhi.He said he liked Hyderabad but the metro in Delhi was much faster and was fully air conditioned. A few men(not the Gentlemen!) got into the ladies compartment and then the little guy was like "Dadu why did these people get into the LADIES compartment?" I guess Dadu din't have an answer for he was doing the same. Well The Old & Young are always an exception!
Then came the Nature Cure Hospital known for its Odour! The little guy said, "Dadu Hyderabad ki khushbu bahut ajeeb hai!". Both of us exchanged glances and smiled. The next stop was supposed to be the Sanjeevaiah Park (the outer side of the Necklace Road).We were trying to show him the much coveted Necklace Road (the camels, the rides etc) but to our surprise what he could see and sense was different. He asked me "Kya dikha rahe ho? Yeh Hyderabad Ka Kachra???". Then I saw the kachra floating on the water about which the GHMC seemed least concerned....