After a long time… 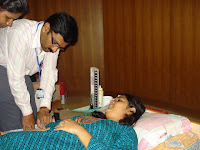 It was after a long time that I was travelling by train. Things were the same. To start with there were the similar faces, the same breaking of the rule “Don’t get into the ladies compartment”, even the same beggars! I wondered how some things never changed…
I was returning home after a great deal of satisfaction and enthusiasm. The reason- I had donated blood for the very first time!. I felt proud for being a 'Universal Donor'. The camp was conducted keeping in view the approaching International Women’s Day, by the Lion’s Club. I could feel the spirit of being a woman in a practical sense.
All my friends had a large number of suggestions and conclusions debited in my mind. Some of them proved to be quite true. However, the feeling of helping someone surpassed my weakness and pains. I reached home very excited after the 40minute journey. My excitement withered away as I heard the arguments put forth by my people, when I told them about my blood donation.